Changing our Game in Molenbeek

On 22 March 2016 Brussels was hit by terrible terrorist attacks which had a big impact on the city. The terrorist attacks in the world have impacted many people’s lives throughout recent years. In Brussels “PlayandPeace” was founded as a platform to help find joint paths of connection and fraternisation in the city and in the neighbourhoods. As well as the “Life for Brussels” association helping victims of the Brussels attacks.

One year after the attacks PlayandPeace is well underway to get funding for Brussel’s first Cruyff Court. BT, Rotary Club Brussels Cantersteen and Rotary International are the first sponsors to commit to the creation of a Cruyff Court. Next to the actual Cruyff Court, PlayandPeace also wants to train young people in the commune of Molenbeek in coaching (according to the principles of the Johan Cruyff Foundation and a joint programme of the Belgian- and Dutch football association (life skills). The coaches are trained by JCF/ KBVB/ KBVB Worldcoaches (Brussels, Amsterdam). The coaches are the ambassadors for Molenbeek. They lead by example on collaboration and playing together on the Cruyff Court(s) and in their communities.

PlayandPeace asked a group of musicians from Belgium and the Netherlands to compose a song about the theme and this is when “Change Our Game” was created. In this song, the musicians call for reflection and reconciliation.

A song contest is linked to the song and everybody is asked to join in. As an individual, a group (class) or more groups (classes) are challenged to perform their own interpretation of (part of) the song.

People can send their contributions for the song contest to info@playandpeace.com (big files via WeTransfer) until 20 November 2017. 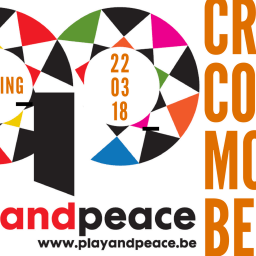 PlayandPeace formulated a challenge which seeks to connect people throughout Brussels, via sports. PlayandPeace seeks funding for a modern football pitch « a Cruyff Court » in Molenbeek-Saint-Jean

After the attacks of March 22, 2016 and the death of Johan Cruyff, two days later, Unico van Kooten founded PlayandPeace together with Ahmed Larouz from Amsterdam. The platform has the objective to realise a Cruyff Court in Molenbeek. A Cruyff Court is a modern version of the timeless neighbourhood football pitch.

On Sunday the 28th and Monday the 29th of May, 180 Amsterdamers and Diwan Awards will organize a unity dinner / iftar in the Royal Foyer together with Meram Restaurants, Ieder1 and Stadsschouwburg Amsterdam.